Literally meaning “holy place”, the name itself is extremely evocative. Luogosanto was founded by Franciscan monks and is a place of worship par excellence. Clinging to the granite rocks of deepest Gallura, the town exudes fraternal spirituality. It is famous for its holy door, a recognition awarded by the Vatican to its monumental and austere basilica, which houses the statue of Our Lady of Gallura. Around the village, surrounded by lush Mediterranean vegetation, there are 22 fascinating sites of contemplation, small rural churches or hermitages carved out of granite: the oldest and most popular is the Hermitage of San Trano, the ideal place for contemplation.

A genuine and "sacred" place where time passes slowly and a welcoming destination for pilgrims that owes its names to the devotion of its community and 22 sanctuaries dotted all around the area. In the heart of Gallura, Luogosanto is a town of fewer than two thousand inhabitants on the slopes of the granite Mount Ghjuanni, famous for a Nuragic site with an intact "capanna delle riunioni" or "meeting hut" (that is open for visits). The town was founded in the early 13th century on the arrival of the Franciscans who established a monastery here, one of the first to be built while Saint Francis was still alive.

Today, following restoration work, it hosts the Nativity of the Blessed Virgin Mary Museum, a centre documenting the Middle Ages in Gallura that covers local historical and religious events and displays the votive offerings donated to the Virgin Mary over the centuries. The basilica, which is dedicated to Our Lady of Luogosanto, was built in Romanesque style by the Franciscans using granite ashlars. It boasts a wooden Madonna (Our Lady of Gallura) and in the 18th century received the privilege of a Holy Door - made in the 1970s, this bronzed door was created by Luca Luchetti and opens to pilgrims for a year every seven years. According to legend, it was built on the site where Our Lady first appeared to two monks to tell them where to find the remains of Saints Nicholas and Trano. The monks found them on a rocky spur where in 1227 they built a sanctuary to the two martyrs, incorporating the cave where they were said to have lived. Known as the Hermitage of San Trano, its altar is a block of stone and the cave forms a natural apse. After depopulation lasting two centuries, Luogosanto began to flourish again in the 17th century thanks to typical rural settlements known as "stazzi": a census has found 350 in the area and their history is documented in Agnana museum. Today, the town boasts narrow cobbled streets and houses similar to noble palaces, with small iron balconies.

From the town, an itinerary that leads to a number of other mediaeval sites, along narrow roads through oak woods and natural treasures, which can be covered on foot, bicycle or horseback. Visitors will find the remains of Villa Sent Steva, a complex that has "existed" here since the mid-14th century, consisting in 16 rooms overlooking a courtyard. In the south-east corner of the complex are the ruins of Palazzo di Baldu, which was perhaps owned by Ubaldo Visconti, a judge from Gallura (1225-38); the small Church of Santo Stefano (17th century) is also part of the complex. On top of Mount San Leonardo stands Balaiana Castle, which can be accessed via a stone stairway. Dating from the 11th century, it was the judge's summer residence and was still standing until the arrival of the Aragonese. A path from the fortress leads to the Church of San Leonardo; originally the castle's chapel, it is now a rare example of Romanesque architecture in Gallura. Nearby are other sanctuaries including San Gavino di Li Coddi, which is covered in junipers, and San Salvatore, which is built entirely of granite. Close to the town is the Church of San Quirico that at the beginning of August hosts one of the rural festivals that bring the community to life from April to November. 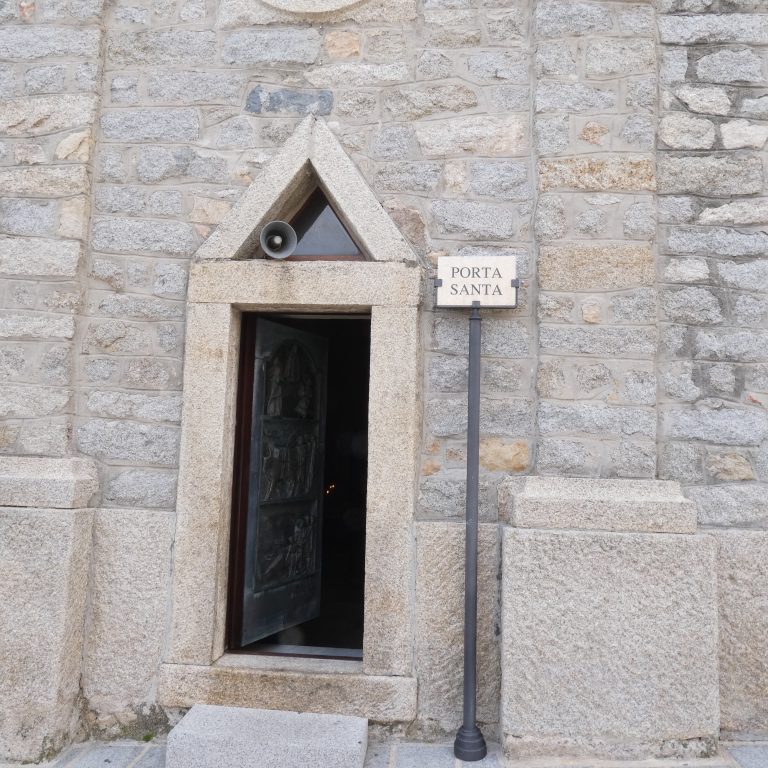 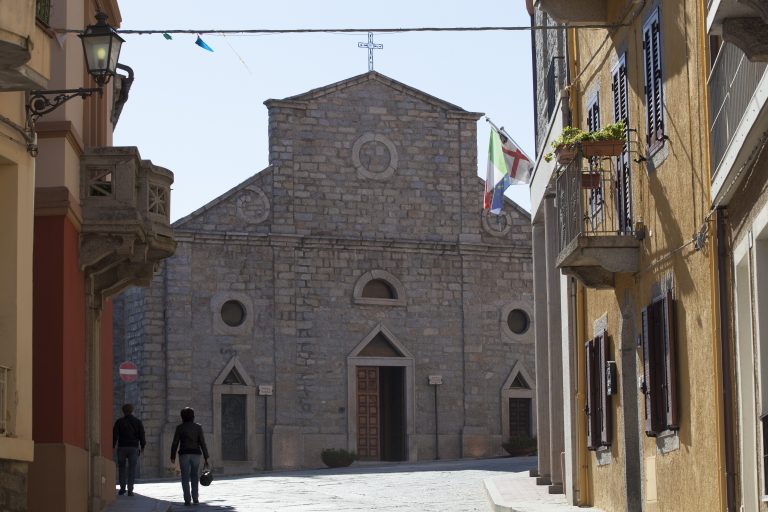 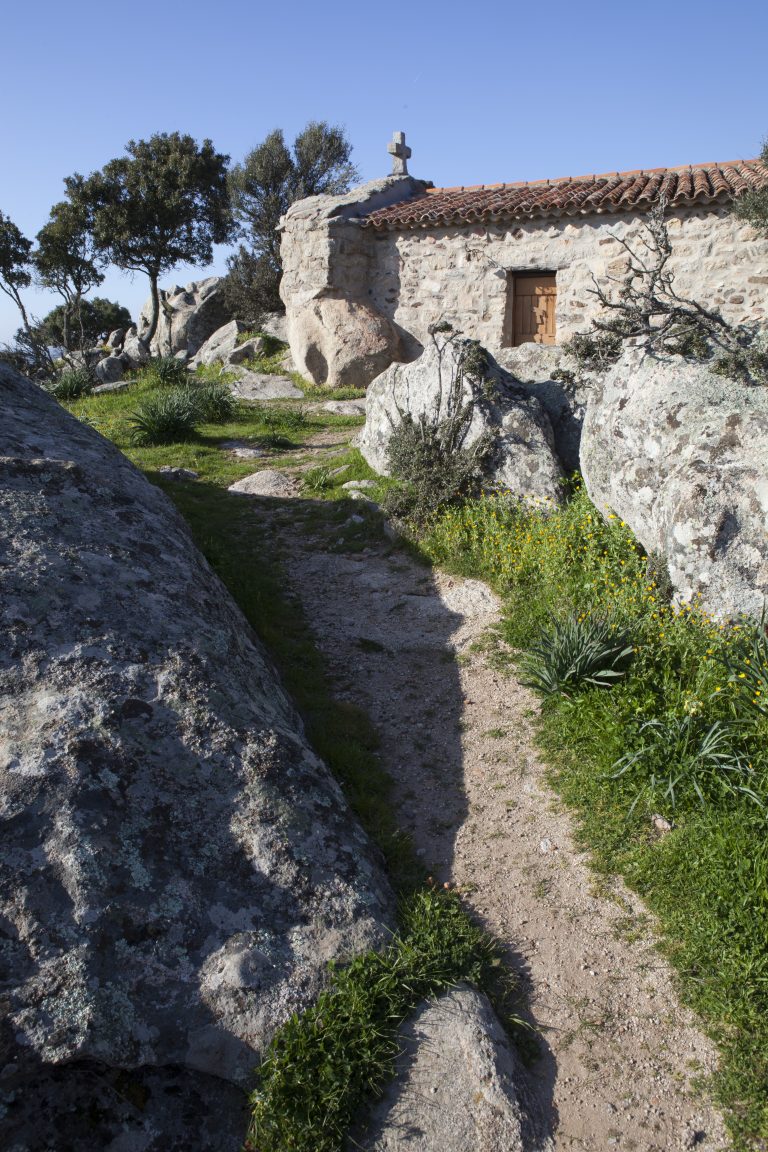 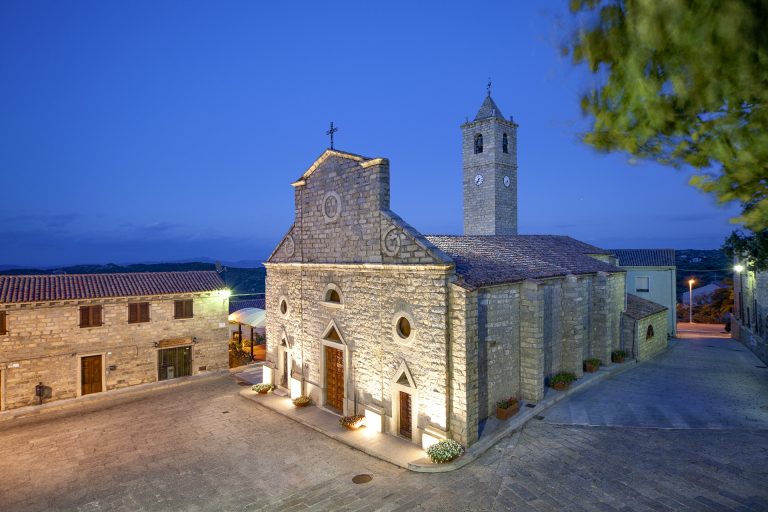